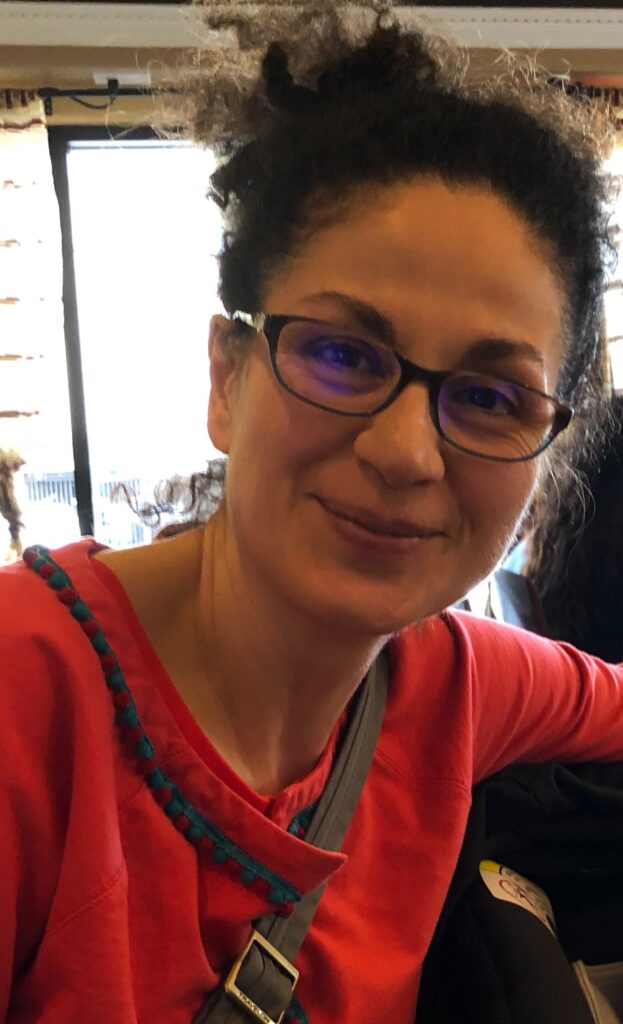 In my last year in high school my mom took me to a fortune teller she heard about from a neighbor. We took the bus to the old town near the castle which was surrounded by gecekondu style houses. The literal translation of this word is “landed at night” referring to the illegally built houses that seem to be frozen in time at a random point during a stalled construction project. Some have the brick walls with plastic sheets stretched over crooked holes that are meant to be windows, Some are complete enough to have patchwork paint from whatever leftover cans the builders could get their hands on.

One of these more complete dwellings near the castle housed my first fortune teller Aynur. As most Turkish names, Aynur has a meaning. I highly doubt that her parents knew what she would be doing for a living one day when they named her “moonlight”. It fit her perfectly. She was a luminous, beautiful, long dark-haired petite woman wearing two layers of cardigans with their colors fading. Our neighbor had told mom that she only accepted a symbolic small fee in return for her services, but we were allowed to bring practical gifts such as food or notebooks and pencils for 8-year-old son.

Aynur’s crystal ball was Turkish coffee cups. Similar in many ways to reading tea leaves, this ritual enjoyed by even non-professional, or non-professing fortune tellers in most Turkish homes involved making a nice cup of Turkish coffee using powder fine ground roasted beans and slowly cooking a heaping teaspoonful of it in water. A special little pot is used that is wider at the bottom and has a long handle and a pouring bit at the rim. After drinking the coffee out of little espresso sized cups, coffee grinds settle at the bottom. You put the saucer on top as a lid, hold it together with the cup and draw little circles in the air with them in front of and moving towards your chest. Then you turn the cup upside down for the coffee grinds to slowly drip and drop towards the saucer. When the bottom of the cup feels cool, you carefully lift it up and look inside with great concentration “hmm”-ing and “humm”-ing. Then you start saying things such as “I see a big kismet at your door. It or he or she will arrive in three days or months or years.” This, by the way, is not so cumbersome to say in Turkish because we don’t have any distinction between, he or she or it, and there’s only one version, “O”, yes just that one letter.

People who are known to be good coffee fortune tellers, know that the coffee cup is just a way to connect to the energy of the person who drank from it and doesn’t try to pull any meaning out of the weird shapes in this inside-out crystal ball. They just connect to that person and say what they feel. Sometimes surprising and then confirmed facts are revealed. Sometimes premonitions are shared that come true a few months later. Regardless of which way it goes, you can count on the fact that if there is a Turkish gathering which usually means there will be a big dinner, it is bound to be followed by Turkish coffee which is bound to be followed by coffee fortune telling. As people take their last sips out of their coffee cups, you can sense the host and the guests looking around the room in search of the best person present for coffee fortune telling and the cups are turned upside down and lined up on the table.

Aynur greeted us at her rusty metal and cracked glass front door holding on to the front of her cardigans. She invited us inside graciously. Her living room was tiny and bare, with a couple of old bed frames and futons turned into makeshift sofas. As mom and I sat there waiting with our coats on, Aynur went to the kitchen to make our coffees. She was back in a few minutes with our coffee cups on a little tray. I tried to sip mine slowly trying not to burn my mouth by gulping it down with impatience. We did the usual turning the cups upside down onto the saucers and circled them towards us before putting them down on the rickety side table between the two sofas. Mom chatted with Aynur about her 8-year-old son. Aynur was very proud of him. “He is a very good student.” she said, “He will finish high school and go to college Inshallah (God willing) just like your daughter will soon.” We had told her that I was in my last year in high school and was going to be taking my university placement exams in the next few months.

Aynur leaned over and put her index finger on the bottom of each cup and asked us whose she should read first. My mom must have sensed my impatience, so she said to read mine first. Aynur carefully picked up my cup with the saucer and gingerly lifted the cup turning it right side up. She seemed to look deep inside the cup without any of the expected “Hmmm….very interesting…” theatrics we were used to observing at gatherings with friends. She did not purse her lips or knit her brows. She just gazed and gazed into the cup for a few minutes then started to speak slowly. “You will get into your top university choice and study what you want.” she started. “The exam time may feel like quite a struggle but don’t worry, it will all work out at the end.” She then told me that she saw me speaking in front of large audiences about human rights and equality. This felt odd and at the same time also rang true to me. Fairness and equality were my top values, but I could not put what she saw, together with getting into my top choice university and studying Industrial Engineering. She then described the man I would meet some years later and marry. I still remember her description that even involved a couple of letters of the alphabet he would have in his name.

I thought of Aynur and her fascinating coffee cup reading many times over the years since then. As she predicted, I got into the university that was my top choice and studied Industrial Engineering. She had not mentioned this next step, but I got a scholarship to study Economics in the U.S. and moved there for graduate school. In my second year, I started to teach Economics classes as a junior instructor. I was talking in front of large groups of students and fairness and equality were definitely involved in the subjects that I was teaching but I wasn’t sure if this was what Aynur had meant.

My love life was not going so well. I was approaching thirty with a series of heart breaks. I finished my degree and moved to San Francisco for my first corporate job. I met D at a friend’s party the summer I turned 32. He had the letters Aynur had mentioned in his name but that was no surprise since he had practically all the letters of the alphabet with four names in total. He was missing one identifying detail. He did not have the scar that Aynur had described on his right hand. I had checked that pretty early on. I had checked many right hands by then and was used to it.

I thought that I could not hold the absence of the scar against D so I said yes when he asked me to marry him ten months later. We went to the City Hall with the friend through whom we had met and signed our many letters into the marriage certificate. We have been together for twenty years. D did not miss any opportunities to get injured and have multiple little scars on his hands over the years. The most visible one, which is also the most recent one, is on his right hand near his wrist. More than the scar though, his personality fits Aynur’s description.

“What about the human rights and equality talks?” you might be wondering. After about a decade in the corporate world, I moved into working for non-profit organizations. I ran human right awareness events and also gave talks on topics such as human trafficking, modern day slavery, gender equality, and fair trade to audiences of all sizes.

I wonder where Aynur is and how she is doing and what her son ended up studying at college ten years after I did. I remember her fondly every time I look at the little scar on D’s right hand and when the coffee cups are flipped upside down at every Turkish gathering and all the eyes in the room turn to me for telling their fortune.

Nil Demircubuk is a Life Coach and Intuition teacher with an integrative approach. She studied engineering, obtained a PhD in economics, taught economics, ran the data group in a financial technology firm as a senior director, and led human rights awareness programs in non-profit organizations.